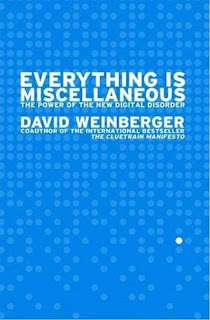 Everything is Miscellaneous (Prólogo):
But we all know how reality works, so why worry about what might be possible in some sci-fi alternative universe?

Because the alternative universe exists. Every day, more of our life is lived there. It’s called the digital world.

Instead of atoms that take up room, it’s made of bits.

Instead of making us walk long aisles, in the digital world everything is only a few clicks away.

Instead of having to be the same way for all people, it can instantly rearrange itself for each person and each person’s current task.

Instead of being limited by space and operational simplicity in the number of items it can stock, the digital world can include every item and variation the buyers at Staples could possibly want.

Instead of items being placed in one area of the store, or occasionally in two, they can be classified in every different category in which users might conceivably expect to find them.

Instead of living in the neat, ordered shelves we find in the Prototype Labs, items can be jumbled digitally and sorted out only when and how a user wants to look for them.

Those differences are significant. But they’re just the starting point. For something much larger is at stake than how we lay out our stores. The physical limitations that silently guide the organization of an office supply store also guide how we organize our businesses, our government, our schools. They have guided—and limited—how we organize knowledge itself. From management structures to encyclopedias, to the courses of study we put our children through, to the way we decide what’s worth believing, we have organized our ideas with principles designed for use in a world limited by the laws of physics.

Suppose that now, for the first time in history, we are able to arrange our concepts without the silent limitations of the physical. How might our ideas, organizations, and knowledge itself change?

That journey will take us from Aristotle to the quiet psychology professor in Berkeley, California, who proved him wrong. From scientists trying to number living things to the businesses that are deciding that if they make their information messier, it’ll be easier to find. From the eighteenth-century encyclopedists who were accused of violating God’s order because they arranged topics alphabetically to the world’s first encyclopedia without editors, page limits, or order.

And here’s a hint about what we will find. As we invent new principles of organization that make sense in a world of knowledge freed from physical constraints, information doesn’t just want to be free. It wants to be miscellaneous.

Capítulo 1: The New Order of Order: We have entire industries and institutions built on the fact that the paper order severely limits how things can be organized. Museums, educational curricula, newspapers, the travel industry, and television schedules are all based on the assumption that in the second-order world, we need experts to go through information, ideas, and knowledge and put them neatly away.
. PedroF