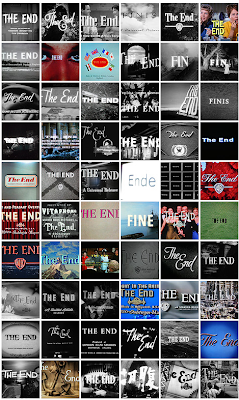 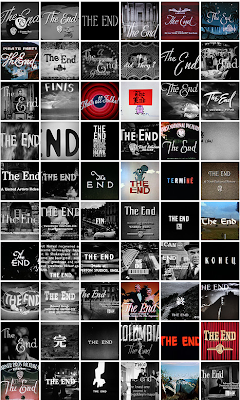 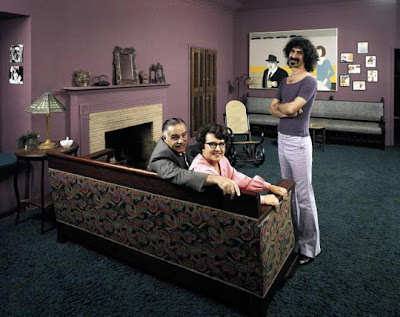 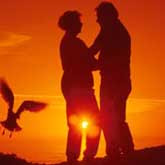 Britain on top in casual sex league: A new study has found the British are the most promiscuous western nation 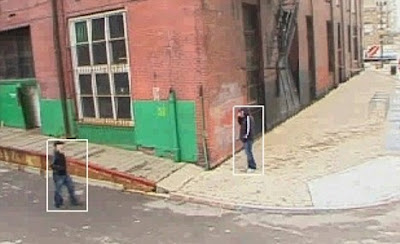 ...não estranhará concerteza a sua evolução: The CCTV that spots crimes BEFORE they happen: CCTV cameras which can 'predict' if a crime is about to take place are being introduced on Britain's streets.

The cameras can alert operators to suspicious behaviour, such as loitering and unusually slow walking. Anyone spotted could then have to explain their behaviour to a police officer.

Assembler is a new physics based wonder where you move some depository equipment to get your precious green crate in position. For what? No matter! Physics work perfect and the feel of grabbing and moving around things is just perfect. Don’t play too much or you’ll dream of dirty green crates flying around.

In Splitter, each level can be solved in a number of different ways. Will you be able to come up with a brand new solution?
. PedroF

BBC guidelines on offensive language: Any proposal to use the most offensive language (cunt, motherfucker and fuck) must be referred to and approved by a senior editorial figure or for Independents by the commissioning editor and the relevant output controller for television, radio, online and any other service.
[o documento também está online na BBC, aprovado nestas condições]
. PedroF 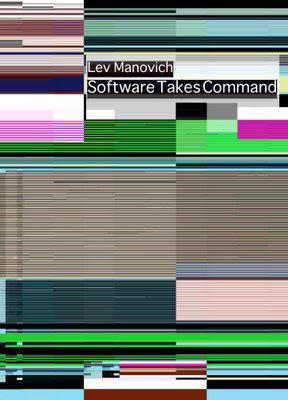 [investigative journalist and author Phillip Knightley], the award-winning reporter who led the Sunday Times' legendary Insight team between 1965 and 1985, said it was a 'great mistake' for newspapers to move from city centre premises to cheaper out-of-town locations, making access more difficult for potential sources.

The migration had severed one of the fundamental links between investigative journalists and their informants, Knightley argued.

"A newspaper has got to be in the centre of things," he said. "Prospective whistleblowers used to be able to walk down the northern side of Fleet Street and go past three or four newspapers.

"If one knocked you back, you could go into the next one. Nowadays it would require a conscious decision and half a day to go down to Wapping, and when you got there they probably wouldn't let you in anyway." [...]

His proudest achievement, he said, was the Insight team's investigation into the tax evasions of the wealthy Vestey family. He described how a moment of luck sparked a two-year investigation, culminating in the exposure of the Vesteys' £88m scam and the amendment of British offshore tax law.

"The Vestey investigation walked into my life off the street," Knightley said. "The man who brought it in was an academic who was on holiday. He was walking past The Sunday Times and just thought, 'Maybe they'll be interested in all this research I've done'. That couldn't happen any more."

Knightley said handing over editorial budgets to accountants had also cut down reporters' opportunities to work on investigations, which were rarely deemed cost-effective. Australian newspapers, for example, were calculating stories' cost efficiency word by word, he said.
. PedroF 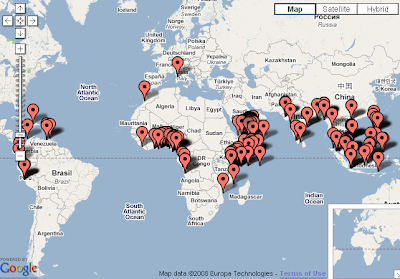 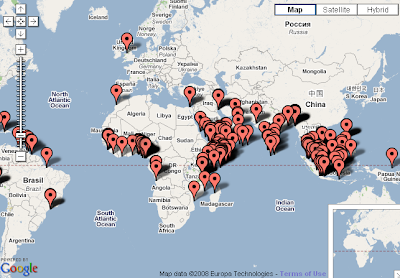 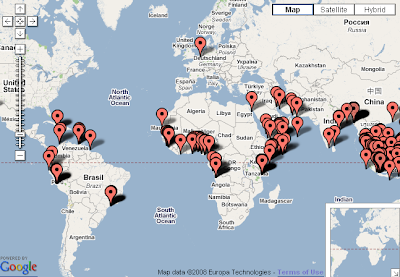 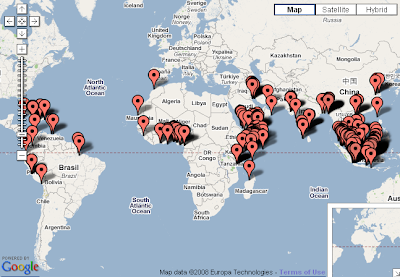 
Onion Nation: If its absurdist twists and wicked parodies of conventional journalism are just a joke, the country's leading satirical newspaper is having the last laugh

If you were a prospective gag headline, you would probably feel about the writers' room at the Onion the way World War II soldiers felt about the view of Omaha Beach as the landing craft doors yawned open. By midafternoon on a Monday, at the paper's SoHo offices in Manhattan, the writers at America's most successful satirical newsweekly had mowed down somewhere in the neighborhood of 600 possible headlines in search of a dozen or so solid comic premises around which an issue of the paper would be built.

In an inversion of the traditional editorial process, the Onion chooses its headlines and then invents stories to fit them.
. PedroF

Sabia que o vídeo original tem três anos? Scott McLeod explica:
In August 2006, Karl Fisch, Technology Director of Arapahoe (CO) High School, made a video called Did You Know?. In January 2007, I modified the video. You can see my version here:
* Did You Know? (McLeod modification)
In June 2007 Karl and I made a new version with the help of XPLANE:
* Did You Know? 2.0
To date Did You Know? has been viewed online over 10 million times and has been shown in countless workshops, conferences, keynote presentations, etc. Karl and I have received literally thousands of e-mails about Did You Know? from individuals, schools, corporations, non-profit organizations, and state and federal government agencies. More information about the presentation is available at http://shifthappens.wikispaces.com.

Sabia que "Did You Know? is intended to be a conversation starter." 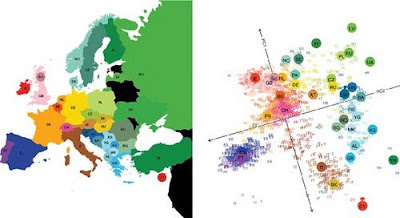 Geocoding Genes for Cartographic Comparisons: It shows a 2D plot of genetic similarity across Europe, colour-coded by country, alongside a political map of Europe using the same colours. 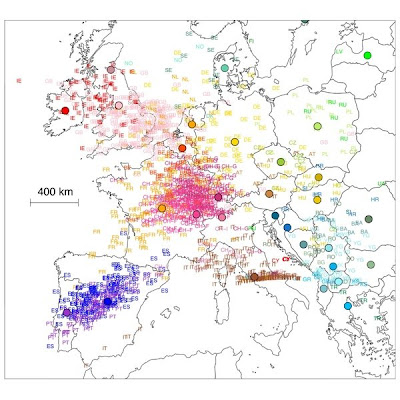 The 10 Worst Corporations of 2008: The financial meltdown and economic crisis illustrated that corporations will destroy even themselves in search of profit. [...]

Of course, the rest of the corporate sector was not on good behavior during 2008 either, and we do not want them to escape justified scrutiny. In keeping with our tradition of highlighting diverse forms of corporate wrongdoing, we include only one financial company on the 10 Worst list. Here, presented in alphabetical order, are the 10 Worst Corporations of 2008.
AIG: Money for Nothing
Cargill: Food Profiteers
Chevron: "We can't let little countries screw around with big companies"
Constellation Energy: Nuclear Operators
CNPC: Fueling Violence in Darfur
Dole: The Sour Taste of Pineapple
GE: Creative Accounting
Imperial Sugar: 13 Dead
Philip Morris International: Unshackled
Roche: Saving Lives is Not Our Business
. PedroF 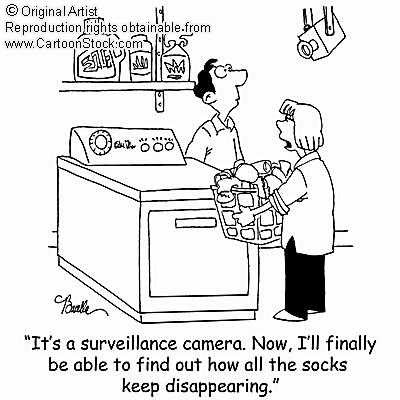 Social services 'set up CCTV camera in couple's bedroom': Social workers set up a CCTV camera in the bedroom of a couple with learning difficulties in order to monitor their behaviour, a new report claims.

Council staff are said to have spied on the young parents at night as part of a plan to see if they were fit to look after their baby, who was sleeping in another room.

The mother and father were forced to cite the Human Rights Act, which protects the right to a private life, before the social services team backed down and agreed to switch off the surveillance camera while they were in bed together.

The case is highlighted in a new dossier of human rights abuses carried out against vulnerable and elderly adults in nursing homes and hospitals across Britain.

It comes just days after the Government admitted town halls have gone too far in using anti-terror laws to snoop on members of the public.
. PedroF

Where Do Hard Drive Heads Come From?
. PedroF 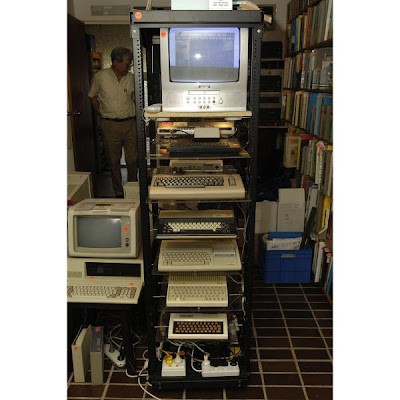 Oxford Word of the Year 2008
Hypermiling or “to hypermile” is to attempt to maximize gas mileage by making fuel-conserving adjustments to one’s car and one’s driving techniques.

Word of the Year Finalists:
frugalista – person who leads a frugal lifestyle, but stays fashionable and healthy by swapping clothes, buying second-hand, growing own produce, etc. [This could become the nom de guerre of the “recession warrior.”]

moofer – a mobile out of office worker – ie. someone who works away from a fixed workplace, via Blackberry/laptop/wi-fi etc. (also verbal noun, moofing)

topless meeting – a meeting in which the participants are barred from using their laptops, Blackberries, cellphones, etc.

toxic debt – mainly sub-prime debts that are now proving so disastrous to banks. They were parceled up and sent around the global financial system like toxic waste, hence the allusion.
. PedroF 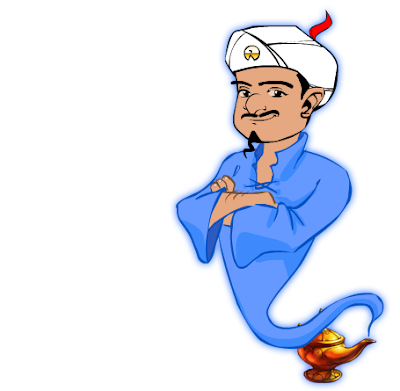 Hello, I am Akinator, the Web Genius.
. PedroF

An Infinite Loop in the Brain: Wouldn't it be great to be able to remember everything? To see all our most important moments, all the priceless encounters, adventures and triumphs? What if memory never faded, but instead could be retrieved at any time, as reliably as films in a video store? [...]


In neurobiological terms, a memory is a stored pattern of links between nerve cells in the brain. It is created when synapses in a network of neurons are activated for a short time. The more often the memory is recalled afterwards, the more likely it is that permanent links develop between the nerve cells -- and the pattern will be stored as a long-term memory. In theory there are so many possible links that an almost unlimited number of memories can be permanently stored.

So why don't all people have the same powers of recollection as Jill Price? "If we could remember everything equally well, the brain would be hopelessly overburdened and would operate more slowly," says McGaugh. He says forgetting is a necessary condition of having a viable memory -- except in the case of Price and the other three memory superstars.

For McGaugh, there is another reason why people with such phenomenal memory are so puzzling. They challenge a theory on which his research has been based for the last half a century. This theory, based on clinical observation, says memories are stored in greater detail and with more staying power when they are tied to emotion.
. PedroF

For Laid-Off Journalists, Free Blog Accounts: It’s a long way from $700 billion, but the media start-up Six Apart is introducing its own economic bailout plan.

The TypePad Journalist Bailout Program offers recently terminated bloggers and journalists a free pro account (worth $150 annually) on the company’s popular blogging platform. In addition to the free yearly membership, the 20 to 30 journalists who are accepted will receive professional tech support, placement on the company’s blog aggregation site, Blogs.com, and automatic enrollment in the company’s advertising revenue-sharing program.
. PedroF 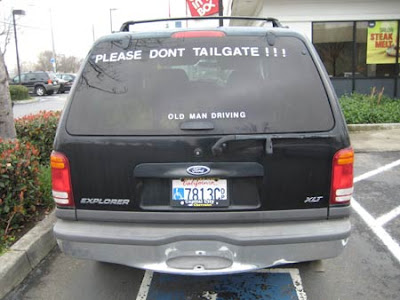 Typealyzer - What type is this blog?
The Doers: The active and play-ful type. They are especially attuned to people and things around them and often full of energy, talking, joking and engaging in physical out-door activities.

The Doers are happiest with action-filled work which craves their full attention and focus. They might be very impulsive and more keen on starting something new than following it through. They might have a problem with sitting still or remaining inactive for any period of time.
. PedroF


Moby-Dick by Herman Melville, with notes to help the reader
. PedroF

The British Cartoon Archive, previously known as the Centre for the Study of Cartoons and Caricature, was established in 1973, as a research centre and picture library, based upon a unique archive of over 85,000 pieces of cartoon artwork supported by a reference library of newspaper cuttings, books, catalogues and magazines
. PedroF 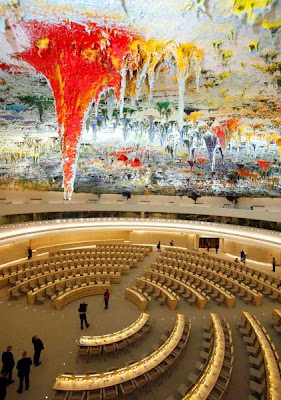 Miquel Barceló
Artist Barcelo unveils $23 million ceiling at UN: A $23 million ceiling painting featuring hundreds of dangling icicle shapes that has been criticized for its hefty price tag was unveiled Tuesday at the U.N. offices in Geneva.
The 16,000-square-foot (1,500-square-meter) elliptical dome full of bright colors and torn aluminum took over a year to produce and it will grace the Human Rights and Alliance of Civilizations Room at the European headquarters of the United Nations.
Spanish abstract artist Miquel Barcelo used more than 100 tons of paint with pigments from all over the world, and worked with architects, engineers and even particle physics laboratories to develop the extra-strength aluminum for the dome.

Controversial UN artwork unveiled: The Spanish Foreign Ministry said the government and private donors helped pay for the artwork.
Of the public money, 500,000 euros (£421,425) came from a budget for overseas development aid and international organizations like the United Nations.
The Popular Party said that meant money which should have been spent on alleviating poverty was instead used to pay Barcelo. 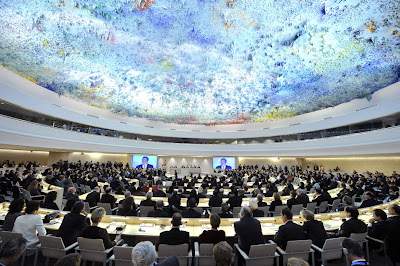 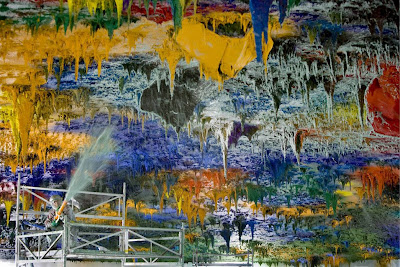 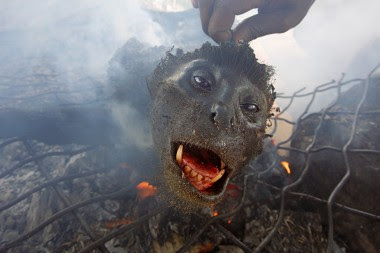 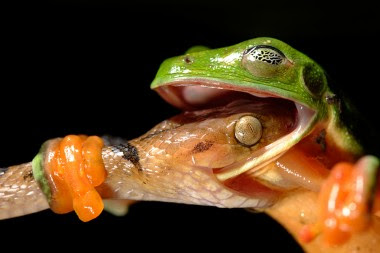 Prize of the audience
. PedroF 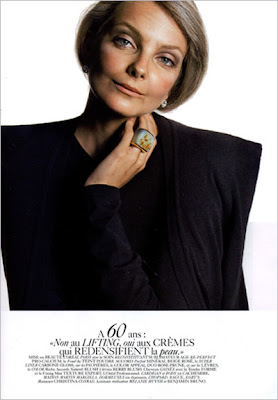 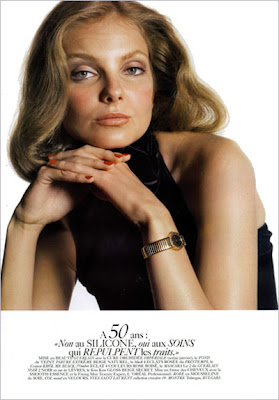 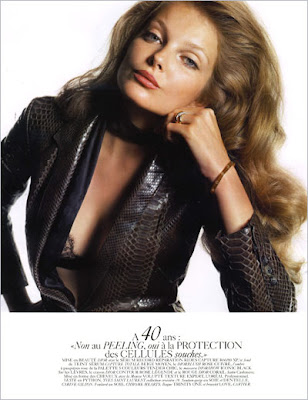 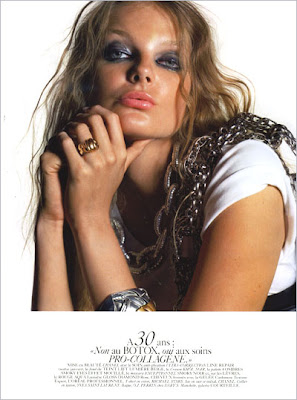 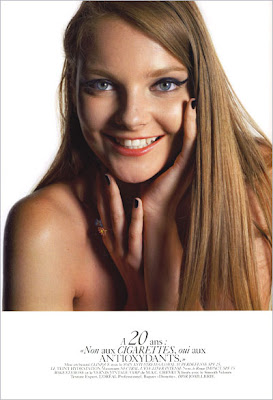 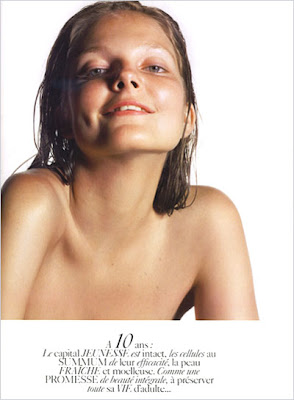 The magic of make-up, photography and a good model
. PedroF

10 Fascinating Last Pictures Taken: This list consists of 10 last time stamps in history taken of and by some fascinating individuals.
. PedroF 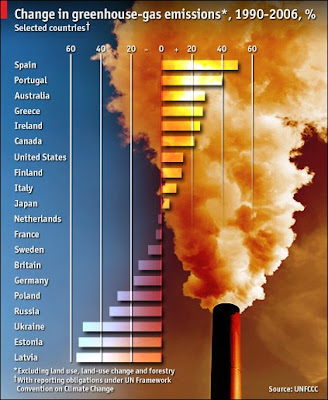 A climate of change: How countries' greenhouse-gas emissions have changed since 1990: eastern and central European have shown big reductions from 1990 to 2006, driven in part by the collapse of heavy industries. By contrast emissions in Spain, Portugal and Ireland grew enormously as their economies surged ahead.
. PedroF