THE study of modern history has been, during a long course of years, greatly neglected in the generality of public schools; but it now begins to be regarded (as indeed it ought always to have been) as an object of the greatest importance. In England, particularly, it constitutes one of the principal branches of both public and private education.

The abbé de Vertot’s History of the Revolutions of Portugal has been always esteemed equally entertaining and instructive; and as such more especially calculated for the use of young people. The late events in that country has made it doubly interesting, and nothing now seems wanting to complete so excellent a performance, but to continue the narrative to the present period. (...)

The recent departure of the family of Braganza from Lisbon, and their arrival in Brazil, has called for the attention, and interested the minds of every one. We have therefore been tempted to give a slight sketch of a country which is now become an object of no small curiosity: to which we have added, for the satisfaction of those readers who may be desirous of a more minute description, a list of the principal authors who have made this beautiful, though remote part of the new world, the particular object of their attention. (...) 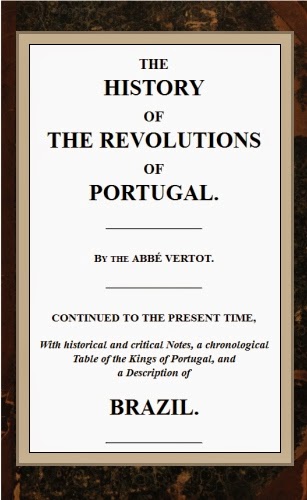 THE kingdom of Portugal makes part of the great extent of country called Spain; most of its provinces bear the names of the different kingdoms into which it is divided: that of Portugal lies to the West of Castille, and on the most western coast of Europe; it is only a hundred and ten leagues in length, and its greatest breadth does not exceed fifty. The soil is fertile, the air wholesome, and the heat of the climate is tempered by refreshing breezes and fruitful showers. The crown is hereditary, and the monarch absolute. The formidable tribunal of the Inquisition is regarded by this prince as the safest and most useful means of forwarding his political views, and as such, employed by him with the greatest success. The Portugueze are naturally fiery, proud, and arrogant, greatly attached to their religion, though more superstitious than truly devout; they regard almost every event as a prodigy, and not only persuade themselves, but endeavour to persuade others, that they are the peculiar favourites of Providence, which never fails to protect them in the most extraordinary manner.

Deste The History of the Revolutions of Portugal
. PedroF

In short--political differences in ideology and praxis between the parties are irrelevant.

In the last forty years, periods of economic growth, stagnation, and recession have occurred in equal measure irrespective of which party held the power. An examination of these economic periods reveals that any one political party's influence is no more or less beneficial than any other. (...)

One consequence of Portugal's "tribalism politics" is that the current politics disproportionately focuses resources, including political energy, on short-term policy goals that can be implemented within the potentially shortened timeframe between election cycles. Uncertainty about term length and the desire to maintain political favor within a shorter timespan undermines the development of sustainable long-term goals (...)

There are at least three observations that illustrate the failures of Portugal's political system in developing sustainable, long-term goals. The historical regularity of political-economic crises, which in recent times are occurring with greater frequency, is one such observation. From 1974 to 2003 Portugal faced negative growth in 9-10 year intervals (1974/1975 - 1983/1984 - 1992/1993 - 2002/2003). After 2003, however, the negative growth time interval occurred at the fifth year (in 2008/2009). Secondly, since 1976, all major institutional innovations adopted by Portugal originated from without the country. The principle examples include, the initiation of negotiations with the European Economic Community (EEC) in 1977, the intervention by the IMF in 1978 and 1983, the full adoption of EEC regulations in 1985, adoption of the EURO in 2002, and another IMF intervention in 2011. Finally, the widening of the income inequality gap as illustrated by the fact that in 1976 the richest 0.1% gathered 1.3% of the country's income, but three decades later (2005) this value had already nearly doubled to 2.5%. (...)

If key development variables are indifferent to political parties' differences, it follows that the political process should be based on a non-confrontational, cooperative process grounded in elevated political ethics of the common--not the tribal--good.

Deste "Four Decades after the 'Third Wave of Democratization' and the Irrelevance of Political Parties' Differences in Portugal: 1974-2014"
. PedroF


via Drone flies through fireworks, gets explosive footage
. PedroF


do DBLG, via Each Frame of This Stop-Motion Animation Was Made with a 3D Printer
. PedroF

via Overwork And Its Costs: The U.S. in International Perspective
. PedroF

Hoje:Tamiflu & Relenza: how effective are they? Tamiflu (the antiviral drug oseltamivir) shortens symptoms of influenza by half a day, but there is no good evidence to support claims that it reduces admissions to hospital or complications of influenza.

A ler: Scientists say UK wasted £560m on flu drugs that are not proven - Britain stockpiled drugs for predicted bird flu in 2005 and swine flu in 2009 that independent scientists say are no cure

via Land Rover Has Invented A 'Transparent' Car
. PedroF

- those gatekeepers suck. They’re arrogant and easily swayed by big, nice-sounding dangerous ideas; they’re ambitious and careerist and forgetful and unimaginative and shortsighted; they’re subject to groupthink, beholden to corporate interests, and enamored of fame and power.

- The right to free speech may begin and end with the First Amendment, but there is a vast middle where our freedom of speech is protected by us—by our capacity to listen and accept that people disagree, often strongly, that there are fools, some of them columnists and elected officials and, yes, even reality-show patriarchs, that there are people who believe stupid, irrational, hateful things about other people and it’s okay to let those words in our ears sometimes without rolling out the guillotines.


via THE HISTORY OF THE MOVIE TRAILER
. PedroF