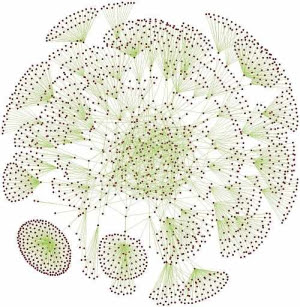 A Internet se parece com um dente-de-leão
Happy 30th Birthday Internet! The Internet is 30 today. Exactly 30 years ago today on November 22, 1977 the first three networks were connected to become the Internet. These three were:

* ARPAnet
* A lossy packet radio network (the lossiness of this network greatly influenced the design of TCP/IP)
* The Atlantic Packet Satellite Network (a.k.a. SATNET)

There were computer networks before this, but this was the first network of networks that deliberately attempted to connect heterogeneous systems without regard for platform. It was the thing which grew into today’s Internet. Except for one brief discontinuity in 1983 when the entire Internet was turned off to switch over to TCP/IP, there’s a continuous progression from then to now.
. PedroF