Is That an Emoticon in 1862? A historical newspaper specialist at the digital archival company Proquest believes he has found an example of a sideways winking smiley face embedded in The New York Times transcript of an 1862 speech given by President Lincoln. Other historians are not so sure, saying the semicolon alongside a closed parenthesis is either a mistake or a misinterpretation of something that is perfectly grammatical for that era.

Inaugural Addresses of the Presidents of the United States: George Washington to George W. Bush

Read the President's entire agenda & Change has come to WhiteHouse.gov: Just like your new government, WhiteHouse.gov and the rest of the Administration's online programs will put citizens first. Our initial new media efforts will center around three priorities:

Communication -- Americans are eager for information about the state of the economy, national security and a host of other issues. This site will feature timely and in-depth content meant to keep everyone up-to-date and educated. Check out the briefing room, keep tabs on the blog (RSS feed) and take a moment to sign up for e-mail updates from the President and his administration so you can be sure to know about major announcements and decisions.

Transparency -- President Obama has committed to making his administration the most open and transparent in history, and WhiteHouse.gov will play a major role in delivering on that promise. The President's executive orders and proclamations will be published for everyone to review, and that’s just the beginning of our efforts to provide a window for all Americans into the business of the government. You can also learn about some of the senior leadership in the new administration and about the President’s policy priorities.

Participation -- President Obama started his career as a community organizer on the South Side of Chicago, where he saw firsthand what people can do when they come together for a common cause. Citizen participation will be a priority for the Administration, and the internet will play an important role in that. One significant addition to WhiteHouse.gov reflects a campaign promise from the President: we will publish all non-emergency legislation to the website for five days, and allow the public to review and comment before the President signs it. 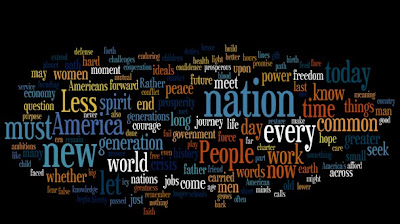